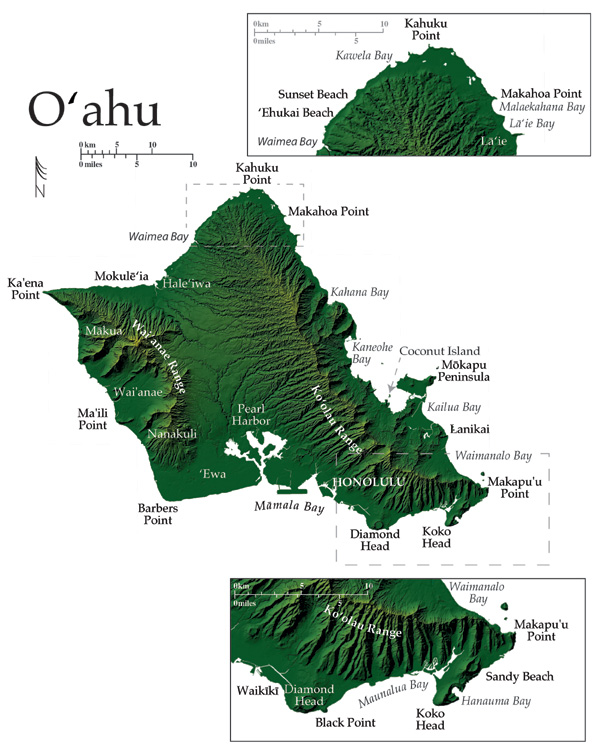 O‘ahu is the third largest Hawaiian island with 180 km of general coastline that contours a highly irregular shape that was greatly influenced by two massive landslides, that removed ~1/3 of the northeastern portion of the island and aproximately 1/2 of the western side . Today, the shape of O‘ahu is constrained by two great mountain ranges that are the eroded remnants of two separate shields truncated by the prodigious slides.

The Ko‘olau Range (2.7 my in age) runs up the northeast side of the island, perpendicular to the trade winds, whereas the older Wai‘anae Range (3.9 my in age) extends along the west side. Moisture rich trade winds are typically pushed across the broad side of the Ko‘olaus, maintaining lush vegetation that reaches from the mountains to the coast. In contrast, the Wai‘anae Range on the west side is dry, receiving little of the moisture carried by the trade winds.

O‘ahu is the most densely populated Hawaiian island, home to almost 900,000 of the total 1,200,000 residents in the State. The combination of a dense population, government, and an industry dedicated to tourism, results in heavy use of the islands shorelines.

Kahuku Pt. at the northeastern tip of the island is a low coastal terrace backed by extensive wetland areas that contain: the James Campbell National Wild Life Refuge and large shrimp aquaculture ponds. Rocky limestone cliffs surround embayments on the west side of Kahuku Pt., while relict and modern dune fields occupy much of the seaward edge of the point. Kahuku Pt. and Makahoa Pt., to the east, are examples of lithified eolianites that have been shaped by chemical weathering, intertidal boierosion, and the northeast trade winds to which they are fully exposed.

The northwest coast of O‘ahu extends from Kahuku Pt. to Hale‘iwa, and is characterized by massive winter surf, long sandy beaches, rocky points, and patches of exposed beack rock. The beach rock is particularly exposed in the winter, when foreshore slopes steepen, and large quantities of sand are moved by high surf from the waters edge toward the back of the beach. Sand at the shoreline is mostly coarse grained and calcareous, a signature of the high energy waves that impact this coast in the winter.

Many of Hawai‘i’s renowned surf breaks exist on the northwest coast between Kawela Bay and Hale‘iwa, where wave heights can reach up to 10-15 m. On any given winter day spectators along the beaches at Sunset Beach, ‘Ehukai Beach (Pipline), Banzai Beach, and Waimea Bay, will undoubtedly be impressed by the powerful surf and those that venture to ride it. In contrast, summer conditions on these same beaches are placid, and the steep winter shorelines replaced by flat wide beaches.

The Mokulë‘ia shoreline extends west from Hale‘iwa toward Ka‘ena Pt. at the westernmost corner of the island. This low lying coastal terrace faces due north with consistent trade winds blowing across it to the base of the northern Wai‘anae Range. Nearly the entire coastline from Mokulë‘ia to Ka‘ena Pt. is fronted by broad wave-cut platforms of older limestone with small sandy beaches and vegetated dunes occurring in gaps along the shoreline.

The coastal slope increases in steepness as the Mokulë‘ia shoreline approaches Ka‘ena Pt. The point is composed largely of fossiliferous coral conglomerate with loose coral and basalt cobbles up to ~10 m above sea level, fronted by a dune field. The road that once ran around Ka‘ena Pt., to Mäkua on the western shore of O‘ahu, was destroyed years ago by high surf and chronic erosion.

Large surf and windy conditions prevail along the west side where sandy beach embayments and beautiful basaltic headlands characterize the coast. Reef limestone ~ 30 and 6 m above modern sea level is found near Wai‘anae and Nänäkuli along this coast indicating higher past stands of the sea associated with interglacial periods ca. 500,000 yrs and 125,000 yrs BP (Jones 1993).

The south shore of O‘ahu is almost completely developed from the oil refineries at Barbers Pt. to the dense neighborhood developments at Hawai‘i Kai and Portlock. Much of the shoreline is artificially hardened to protect the densely packed communities that lie directly inland, where tourism and local businesses thrive in an ideal tropical climate

The Pearl Harbor embayment, along the south coast, formed as the island sank ~360 m toward the end of the main shield building phase, drowning the river valleys that drain central O‘ahu. Pearl Harbor contains almost 50 km of shoreline backed by extensive wetlands through which highly sedimented waters enter the harbor. The coastal plains to the west and east of Pearl Harbor, ‘Ewa and Honolulu, lie atop a broad coral reef platform from the late Pleistocene last interglacial that developed during interglacial periods of warmer waters and higher relative sea level.

Most of the year, south shore surf breaks fronting Honolulu and Waikïkï are crowded with local and tourist enthusiasts, taking advantage of long period surf formed by storms in the southern hemisphere.

Waikïkï, perhaps one of the best-known shorelines in the nation, and a center of tourist activity, lies at the eastern end of Honolulu. Waikïkï was, until the beginning of the 20 th century, a wetland and marsh holding only a narrow  sandy strand at the shoreline. Massive efforts to divert the inland waters allowed the city to lay down imported sand to create the famous white sand beaches of Waikïkï that are maintained by periodic re-nourishment projects.

Diamond Head Crater, lying to the east of Waikïkï at the southern tip of the island, was formed during the Honolulu Volcanic Series rejuvenated eruptions. Diamond Head was built by hydromagmatic explosions that ripped through 200,000 year old coral reefs and Ko‘olau basalt. As a result, large pieces of coral and basalt are mixed in the tuff and magmatic debris of the cone. The eruption most likely occurred in a very short period of time from days to perhaps a month, as suggested by the symmetry of the cone (Macdonald et al. 1986). The shoreline directly south of Diamond Head lies ~40 m below the road and is accessible only by footpath. The beach, composed of calcareous sand mixed with terrigenous sediments, stretches for ~1 km and is one of the least developed vistas along the south shore. Black Pt., to the east of Diamond Head, is the last remaining remnant of a cinder cone located seaward of the modern shoreline, the majority of which has been lost to erosion.

East of Diamond Head and Black Pt. lies the broad Maunalua embayment fronted by one of the State’s widest and shallowest offshore reef flats. The wide-ranging commercial and residential developments of the Kähala, ‘Äina Haina, and Hawai‘i Kai districts dominate the backshore in this area. Much of the Maunalua shoreline is armored with sea walls, revetments, and groins that protect valuable coastal real estate much of which is filled land along formerly sandy shoreline.

The east side of Maunalua Bay borders the Koko Rift coastline. The cinder cones of the Koko Rift are among the most obvious row of vents of the Honolulu Volcanic Series (Macdonald et al. 1986). The coastal extent of this group: Koko Head, Hanauma Bay, and Koko Crater is ~10 km and is essentially an undeveloped and natural shoreline.

The back side of Koko Head makes up the east end of Maunalua Bay while the seaward edge, facing south and southeast, forms a rocky coast eroded by surface water runoff and wave erosion. The steep cliffs and strong currents along this exposure help explain the lack of development here and the truly incredible vistas.

Hanauma Bay, central among the Koko Rift triplet, is the remnant of a cone that’s low-lying seaward rim was eventually breached by waves, flooding the crater and creating a deeply indented bay. Hanauma Bay is backed by a wide calcareous beach and surrounded by the high near-vertical cinder walls of the cone. Wave erosion has cut a bench into the crater walls along both sides of the bay. Here olivine crystals eroding from the crater accumulate and mix with the calcareous sands, giving it a greenish hue. The Hanauma Bay Nature Preserve protects the live reef (1-6 m deep) that dominates the nearshore area and covers nearly 2/3 of the crater floor. The reef is home to thousands of aquatic animals that grow to full size in the protection of the preserve. The preserve operates under heavy visitor use with up to a million visitors each year coming to snorkel and dive amidst the abundant wildlife. It is the nation’s most popular county park.

Beyond Hanauma, the southwest facing rocky coast is made up of the thinly layered flows from Koko Crater worn smooth by flowing surface water, and dipping toward the ocean. At the waters edge, the flows have eroded unevenly and protrude as a steep low cliff hanging irregularly over the ocean. This beautiful and rugged coast known as the Kaiwi coastline, trends northeast to Makapu‘u Pt. and is interrupted by the calcareous sands of Sandy Beach Park. This beach park is home to a wide sand beach, moderate backshore dunes, and powerful shore break known throughout the State as an exciting big-wave body surfing site.

Between Makapu‘u Pt. and the south side of Mökapu Peninsula is a low lying coastal terrace, made up of the broad sand bottomed embayments of Waimänalo and Kailua, bisected by the sandy Lanikai shoreline. The coastline is  backed by vegetated dunes and well-developed residential neighborhoods. This northeast exposure is favored for swimming and offshore recreation because of the pristine natural state and the incredible water clarity. Large reaches of fringing reef lie in the shallow water offshore of Lanikai as well as limestone islates dating from the last interglacial and volcanic islets composed of intrusive dike swarms associated with the former Ko‘olau shield. Lithified dunes at Waimänalo and Kailua Bay once held wave cut notches at 6.6 and 8.1 m above sea level (marking  the last interglacial Waimänalo (+ 7.5 m) Stand of the Sea) but have since been removed to supply sand for construction (Macdonald et al. 1986).

Käne‘ohe Bay is tucked deep into the west side of Mökapu Peninsula where it is protected by a wide barrier reef built upon a large fossil dune, 3-5 km offshore. Käne‘ohe, the largest protected bay in the State, harbors a healthy estuary and the University of Hawai‘i Marine Laboratory at Coconut Island (Moku o lo‘e). Käne‘ohe sits at the edge of a low-lying coastal terrace abutting the steep eastern side of the Ko‘olau Range. The shoreline within Käne‘ohe Bay is developed with seawalls, fishponds, and sea aircraft ramps and dredged channels. These constucted features are interspersed with isolated beaches of rocky mud, small mangrove forests, and shallow deltas of sediments deposited from the mountains nearby (Fletcher et al. 2002).

Low lying narrow beaches front the heavily armored shoreline north of Käne‘ohe Bay, where chronic erosion has resulted in significant loss of sandy beach. A broad fringing reef follows the coast to the north beyond Kahana Bay to Lä‘ie at the northeastern end of O‘ahu.

The Lä‘ie coast, consisting of sandy embayments, extends from Lä‘ie to Kahuku at the north tip of the island. The Mälaekahana State Recreation Area and Lä‘ie embayments are lined with unspoiled calcareous beaches backed by vegetated dunes on a low lying coastal terrace. South of Lä‘ie Bay the shoreline is heavily developed and again, extensively armored. The sandy nature of the low coastal plain along the windward side, from Waimänalo to Kahuku, is the result of carbonate deposition under the +2 m seas of the Kapapa Stand ca. 3000 yrs BP.