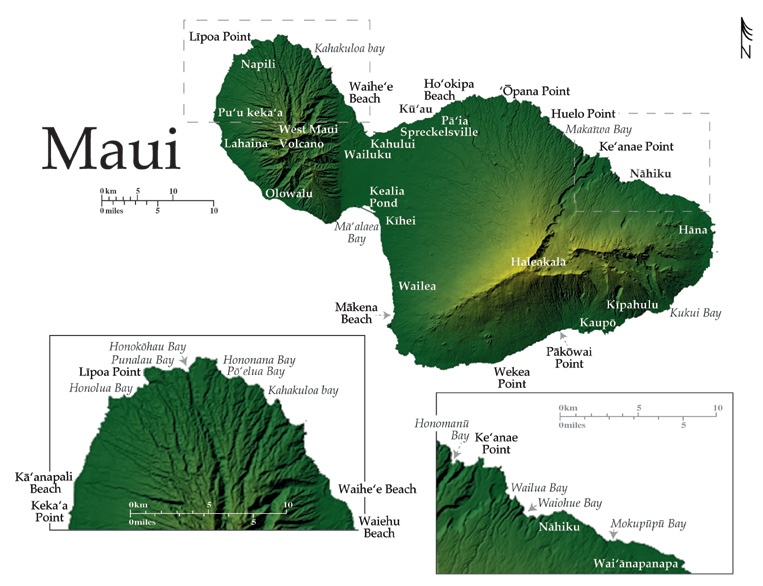 The island of Maui is composed of two large volcanoes separated by a low-lying isthmus. The West Maui Volcano (1.6 Ma) at an elevation of 1,764 m lies to the west of the massive Haleakalä Volcano (0.8 Ma) with a summit that reaches to 3,055 m. Maui has 193 km of general coastline that wrap the two main shields and the isthmus. The isthmus was created during the shield building stage of Haleakalä as lava flowed into West Maui and, is bounded by two embayments, one to the north, and one to the south. Although the West Maui Volcano is extinct, Haleakalä is merely dormant having had its most recent rejuvenated eruption just over 200 years ago.

The population on Maui has nearly doubled since 1990 and development of coastal lands has been widespread. The local government has enlisted scientists the University of Hawai‘i in their efforts to gain a clearer understanding of historic and modern shoreline stability particularly with regard to development.

From North Häna to Ke‘anae, the thickly vegetated countryside along the northeast Maui coast receives an annual average rainfall of 200–300 cm and is fronted by a coastline characterized by steep rocky headlands, low vegetated sea cliffs and shallow sloped embayments. Many of the bays in this area such as Mokupüpü, Waiohue, and Wailua bays, are bordered by lava points bounding pocket beaches composed of shingle and basalt pebbles, and boulders. This terrigenous material has been deposited by streams flowing from the heights of Haleakalä. The eastern portion of the north shore has no protective fringing reef and the sea cliff shoreline and sea stacks nearshore are testimony to the erosive powers of the northeastern trade winds and waves that impact the coast.

As recently as 1,200–1,500 years ago, rejuvenated lava of the Häna Volcanic Series flooded the deep erosional Ke‘anae Valley on the northeast side of Haleakalä, creating a wide, shallow, and jagged lava fan that reaches 1.5 km into the ocean. West of Ke‘anae the sea cliff coastline extends, giving way to only a few narrow stretches of boulder beach backed by deep thickly vegetated valleys like those found within the embayments at Honomanü and Makaïwa.

Maui has become well known among extreme sport enthusiasts for giant waves on the north shore that break over offshore shoals during periods of exceptionally high surf. A short four-wheel drive through the pineapple fields at the base of Peahi Gulch, west of Ke‘anae Pt., brings spectators to the high, rugged, and unprotected muddy cliffs overlooking the facous surf break called “Jaws”, or locally “Peahi”. Here expert tow-in surfers and windsurfers ride the 12 to 21 m faces of waves moving at speeds up to ~48 km/hr, frequently with film crews capturing their feats from helicopters overhead. Large swells are required to cause waves to break over the deep reef in the small steep-sided bays of this area.

The northwest East Maui lowlands are relatively dry with annual rainfall between 75-150 cm. The lowlands are occupied by extensive agricultural, public and residential development. The coastal town of Pä‘ia, the neighborhoods of Kü‘au and Spreckelsville, and the Kahului Airport line the broad sandy embayment of the northeast side of the north Maui isthmus. This area was characterized by extensive low sand dunes during the dynamic changes in relative sea level of the Pleistocene Epoch. Much of the shoreline in this area now contains long beaches of calcareous sand mixed with coral rubble and basalt rock. Broad patches of lithified beachrock lie at the waters edge, while a broad fringing reef offshore provides moderate protection to the coast from the direct impact of North Pacific winter surf. These beaches are interrupted periodically by groins and other engineered structures erected ad hoc to mitigate the loss of coastal properties.

The central north side of the isthmus, at Kahululi and Wailuku, has been developed as a hub of industrial activity and the coast is primarily a commercial deep-draft harbor and heavily constructed shoreline. Development extends for 4 km northeast along the low sloping lands of the West Maui Volcano. The narrow shoreline is largely backed by seawalls, residential neighborhoods, and in the case of Waihe‘e and Waiehu Beach Parks, a golf course.

West of Waihe‘e the coast is narrow and undeveloped, with v-shaped valleys and vegetated gulches carved by surface runoff channeling to the sea. North Pacific waves have cut the shoreline into steep rugged sea cliffs that are skirted by boulders and fluvial deposits. Six major bays along the coast are widely enjoyed by surfers and are bordered by sea cliffs and lava points: Kahakuloa, Pö‘elua, Hononana, Honoköhau, Punalau, and Honolua bays hold pocket sandy beaches in the summer that may erode to reveal boulders in the winter. Access to this region is difficult as no paved road extends the entire length of the coastline.

The west facing Näpili-Kä‘anapali coast of West Maui receives 40–75 cm of rain each year and has a shallow slope that is traversed periodically by streams and surface runoff. Many beaches here are backed directly by seawalls and revetments, built to protect extensive tourist facilities and commercial development from erosion. Because of chronic moderate erosion there is a significant problem with beach loss and narrowing along the hardened coast. The coastline alternates between rocky headlands, and narrow calcareous sandy pocket beaches and is protected from North Pacific swell along its length by offshore fringing reef. A point of geologic interest here is the black volcanic cinder cone Pu‘u keka‘a (Black Rock) that bisects Kä‘anapali Beach into two distinct segments.

Along the southwest facing shore of West Maui heavy development continues at the historic port town and tourist destination, Lahaina. Here the shoreline is rocky with only narrow sand pockets, and in many areas, the ocean laps against the island at seawalls and revetments where beaches once lay. Nearshore portions of wide fringing reef are revealed at low tide and buffer the coast from south swell and Kona storms. The Lahaina-Olowalu coast, along the southern embayment of the Maui isthmus, is lined by long stretches of alternating calcareous sand and basalt pebble beaches, backed by narrow sparsely vegetated dunes and a busy highway. This coast frequently experiences high wind speeds because of trade winds that are channeled between the prominent east and west volcanoes across the isthmus. The south coast of the Maui Isthmus contains eroded soil bluffs behind the M’a‘ä laea recreational boat harbor on the west end. To the east, the coast transitions to a sandy shoreline, fronting the Keälia Wildlife Refuge in the center of the isthmus.

East of the isthmus the shallow sloped coast of Haleakalä faces due west and is heavily developed with tourist facilities at Kïhei and Wailea. Here seawalls and hotel property back long stretches of calcareous sandy beach of varying widths. This coast receives less than 40 cm of rain each year and although moderately protected by fringing reef much of the shoreline is eroded to beachrock, shingle, and cobble by southwestern Kona storm waves.

South of luxury developments at Wailea the west facing coast of Haleakalä is streaked by the most recent lava flows on Maui (circa 1790). Vents at 465 and 170 m above current sea level erupted covering 5.7 km ² of the southwest side of the mountain with lava. A cone from this episode, 109 m high, lies on the coast and separates two wide calcareous beaches: Big Beach and Little Beach collectively known as Mäkena Beach. Big Beach is an important local and tourist recreation area stretching over 1000 m, and is ~20 m wide and backed by a sand floored forest of Kiawe trees.

Lava from rejuvenated eruptions cover the south side of the Haleakalä shield along the Wekea-Kaupö coast, and the immense arid mountainside is largely undeveloped from the coast to the crater at the summit over 3000 m above. The mountainside is minimally eroded by fresh water and the terrain has retained its sharp and jagged surface along the more than 50 km of dry southern coast. At the shoreline shallow sloped lava points and steep rocky headlands have been eroded by waves resulting in a natural sea arch near Pakowai and weathered rocky islets and sea stacks offshore.

Around the southeast end of the island the Kïpahulu coast is regularly inundated by heavy surf churned and refracted around the coast to the north by the trade winds. A variable morphology of steep rocky headlands and shallow sloped embayments characterizes the shoreline. The mountainside along the southeast and east side of Haleakalä transitions rapidly from arid and moderately sloped shorelines to lush steep cliffs in a few shallow landings to the sea.

The Häna coast contains some of the most beautiful and scenic lands on Maui with steep rocky headlands, shallow sloped bays, and cinder cones of rejuvenated volcanism located sporadically along the coast with sea stacks and small rocky islands lying offshore. Wide summer pocket beaches of white sand are tucked into the lee of rocky points, high sea cliffs and cinder cones. During the winter this shoreline experiences considerable erosion, and black sands, products of these erosive events, lie along the coast under lava cliffs in areas such as Wai‘näpanapa.