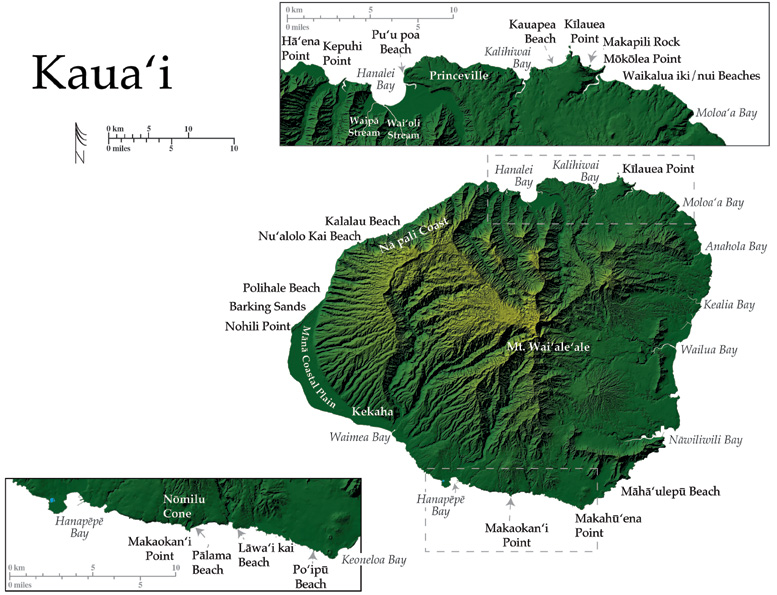 Kaua‘i is the most northern island in the state, lying less than 30 km northeast of Ni‘ihau. Kaua‘i is over 5 million years old and has a roughly circular shape and 220 km of diversified. There are currently two models for the island’s morphology, a single shield model and a two-shield model.

More than 1.5 million years after the primary shield-building stage had ceased on Kaua‘i, rejuvenated volcanism, the Koloa Volcanic Series, began resurfacing two thirds of the eastern side of the island. Locations on the north, east and southern coasts of Kaua‘i contain lavas of the Koloa Series. Remnant volcanic vents trend generally north south across the Kaua‘i and may be found at a few locations on both the north and south shores.

Kaua‘i is known for the variety of microclimates that exist throughout the island including: temperate regions, dry sand dune complexes, and lush river valleys. The complex climate on Kaua‘i is created in part by the island’s high mountains. Mountains such as the centrally located Mt. Wai’ale’ale (1,569 m), trap moisture from the prevailing trade winds, creating vast amounts of rainfall and surface runoff that have carved deep canyons into the island. Mt. Wai‘ale‘ale is the tallest mountain on the island and receives an average of 11.4 m of rain each year, much of which drains northwest into the Alakai Swamp, one of the wettest places on earth.

The north coast, east of Hanalei, was thoroughly covered by rejuvenated lavas of the Koloa Volcanic Series and Koloa lavas make up the backshores of the modern beaches in this area.

The shoreline from Anahola to Hä‘ena is fronted extensively by large segments of fringing reefcut by paleostream channels. This shoreline is composed of a series of coarse-grained calcareous sandy beaches separated by rocky points and interspersed with small stretches of boulder coast and numerous embayments.

Beaches such as Wailakalua iki and Waiakalua nui contain large pockets of sand, and are the seaward ends of mountain valleys that terminate dramatically at a low sloping coast. A classic Hawaiian waterfall cascades down the head of the valley behind Wailakalua iki, feeding a stream that flows across the beach into the ocean where nearshore waters are shallow and rocky.

West of Waiakalua nui lies Kïlauea Pt., the northern most point on the island and in the state. It is the namesake of the National Wildlife Refuge that holds 160 acres of rugged sea cliff coastline including Kïlauea Pt., Crater Hill, and Mökölea Pt. The area harbors several species of central pacific seabirds by providing safe nesting sites. Coastal vegetation endemic to Hawai‘i has been planted throughout the refuge adding to the beauty and natural state of the area (Clark 1990).

Makapili Island lies just offshore and to the west of Kïlauea Pt. The island is formed of tuff and has been partially eroded by waves into a sea arch. Makapili is attached by a tombolo to the only tuff cone on Kaua‘i, Crater Hill. The cone is made up of bombs and blocks of melilite nephelinite and fragments of reef limestone, and is thinly laminated by spattery textured lava. The poorly sorted breccia base of the cone is the result of powerful steam explosions that occurred when the vent first opened (Macdonald et al. 1986).

The beaches fronting the cliffs at Princeville are typically inundated by large winter surf that may create strong along shore currents. Regardless, these beaches are alluring attractions to the popular Princeville golf resort and residential neighborhoods that extend inland from the coast.

Pu‘u poa Beach extends from the west end of Princeville to the mouth of the Hanalei River, and is an effective barrier between Pu‘u poa marshland and Hanalei Bay opening to the north from the Hanalei coastal plain.

Hanalei is the largest bay on Kaua‘i and a popular surf spot. The bay contains a calcareous crescent beach along the shoreline that is over 3 km long and averaging almost 40 m wide in the summer. The sands here are mixed with terrigenous sediments from the Hanalei, Wai‘oli, and Waipä rivers that enter at 3 locations in the backshore of the bay.

The Hanalei interior plain is a fossil shoreline that developed during a higher stand of the sea between 1500 and 4000 yr BP (Calhoun and Fletcher 1999). The large Hanalei River gently meanders over the broad flat Hanalei Valley floor and is one of the few navigable rivers on the island; enjoyed by recreational kayakers and outrigger canoe paddlers.

The island’s largest exposed layers of the rejuvenated Koloa Volcanic Series lavas are visible in the east wall of the Hanalei Valley, and are as thick as 650 m (Macdonald et al. 1986).

The Nä pali Coast State Park, along the northwest coast of Kaua‘i, contains some of the most isolated coastal lands in the state. The park extends along more than 24 km of coast that consists of steeply dipping knife-edge ridges and deep erosional V-shaped valleys. The ridges descend as narrow fingers directly to the ocean where they have been truncated into a spectacular sea cliff coastline. Access to this rugged coast is limited to an 18 km foot trail or boat, however north Pacific swells inhibit this option throughout the winter.

Nä pali translates to “the cliffs” in the Hawaiian language. The cliffs along this coast are evidence of the power generated by north Pacific swells that may reach over 10 m in height before breaking against the island with explosive energy.

Pockets of calcareous sand that exist intermittently at the base of the Nä pali cliffs during the summer months are completely eroded in the winter and spring to reveal boulder beaches. Larger pristine calcareous beaches such as Kalalau and Nu‘alolo kai, which exist year round at the coast, are also eroded significantly in winter and spring.

The extreme steep sided valley walls of the Nä pali coast are covered with extensive vegetation supported by surface water draining seaward off of Mt. Wai‘ale‘ale. Fresh water cascades in many places hundreds of meters as waterfalls that create a lush seascape of vibrant green mountsides that drops into the sea.

The Nä pali formation, of the Waimea Canyon Volcanic series, was named for the exceptional views of shield building lavas afforded along this coast. The exposures dip gently toward the main caldera and have been revealed by tremendous erosion that has cut deeply into this part of the Kaua‘i shield (Macdonald et al. 1986).

Kaua‘i’s west coast is in sharp contrast with the Nä pali coast, and the dramatic sea cliff coastline transitions abruptly into gently sloping wide beaches of calcareous sands at Polihale State Park at the northern edge of the Mänä Coastal Plain. The broad Mänä plain extends over 16 km along the west coast and is skirted by one of the longest stretches of sandy beach in the state, which begins at Polihale and  extends to Kekaha on the southwest coast. This sandy shoreline extends over 24 km, reaching widths of over 90 m in the summer with sand thicknesses up to18 m (Moberly and Chamberlain 1964).

The dry extensive Mänä Plain extends less than 5 km inland to the foot of ancient sea cliffs from a higher Stand of the Sea. Mänä Plain is a Holocene accretional strand plain formed by the convergence of longshore sediment transport from the northeast driven by winter swell and trade winds, and from the southeast driven by summer swell and trade winds. The accretion process was likely aided by a fall of sea level at the end of the late Holocene Kapapa stand of the sea (ca. 3,000 yr BP). The seaward end of the Mänä Plain contains dunes of moderately to well-cemented calcareous sand, and behind the beach ridge, toward the interior plain, deposits of sand and gravel, marl and clay lay where they were deposited in a shallow lagoon. The clay beds are an excellent substrate for individual wedge-shaped buttons of twinned gypsum crystals that grow here, radiating in clusters (Macdonald et al.1986).

Some areas of the Mänä shoreline are fronted by beach rock and most of the continuous beach is backed by active sand dunes. A particularly large system of sand dunes (15 to 30 meters high) backs Nohili Pt. where wind erosion has also revealed sections of older lithified dunes. The larger dune area here is known as Barking Sands because of the abundance of hollowed calcareous grains that resonate sound when agitated or moved by the wind (Macdonald et al. 1986).

The southwest coast contains long, moderately narrow stretches of calcareous beach with a considerable detrital sand and sediment component. Detrital material is distributed by west flowing currents from the mouths of large river valleys such as Waimea and Hanapëpë that drain to the coast from the island’s interior.

Lavas of rejuvenated volcanism inundated much of the central south coast from Kaumakani Pt. to Makahü‘ena Pt. North-south trending clusters of vents lie just inland of the coast at Makaokaha‘i Pt., and Makahü‘ena Pt. at the south point of the island. One cinder cone of rejuvenated eruptions, Nömilu Cinder Cone, lies at the coast on the west side of Makaokaha‘i Pt. The cone holds a fishpond fed by a natural spring that is roughly 20 acres in size and over 20 m deep. The cone has been partially cemented with calcium carbonate by seawater, which enters and exits the pond with the tides (Clark 1990).

Between Nomilü Cone and Makahü‘ena Pt., the Hunihuni coastal plain extends into the ocean as a mass of rejuvinated basalt. The interior plain is developed with the town and resort of Po‘ipü. The shoreline in this area contains crescents and pockets of calcareous sandy beach such as Pälama, Läwa‘i kai, and Po‘ipü beaches. Patches of near shore fringing reef front the entire southwest shore between Nomilü and Po‘ipü. The coast wraps the rocky headland at the southern tip of the island near Po‘ipü where a tombolo extends from Po‘ipü Beach to a rocky islet offshore. This section of shore bore the brunt of devastation related to Hurricane Iniki in 1992. Water levels, the product of storm surge and high tide on September 11 reached over 10 m above sea level and a maxium of 19 m (Fletcher et al. 1995).

Northeast of Makahü‘ena Pt. lies a shoreline that is older and steeper than the relatively fresh basalt of the Hunihuni plain. Keoneloa Bay lies directly on the northeast side of Makahü‘ena Pt. and Pleistocene eolionite cliffs lie in the backshore of the sandy beach. Beyond Keoneloa the coast extends over 3 km as a beautiful undeveloped winding shoreline known as Mähä‘ulepü Beach. This stretch contains the heavily eroded remnant of a caldera on the flank of the main Kaua‘i caldera. Other remarkable features of Mähä‘ulepü include lithified sand dunes, wave eroded nips and terraces, and limestone features such as sinks and caves that are the remains of karstified carbonate dunes (Clark 1990).

Northeast of Mähä‘ulepü lies a gently sloping coastal plain of variable width that extends from the highly irregular embayment at Näwiliwili bay and harbor to the far northeast coast of Kaua‘i at Kepuhi Pt. Streams and rivers flow into these embayed areas and are regularly overwhelmed with fresh water, promoting flooding at the coast. Well-developed fringing reef systems line the full extent of the shore, broken only by stream and river mouths.

Wailua and Kealia bays, along the central east side of Kaua‘i, stretch along a fairly straight coast, and represent former embayments that have been filled in by sedimentation (Moberly and Chamberlain 1964).